The technology behind Frozen the musiical 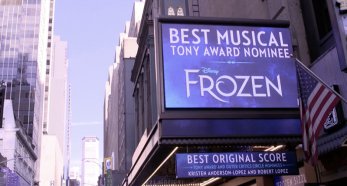 Disney ( DIS ) has had a pretty good track record turning its animated movies into Broadway shows. -The Lion King,- for example, has been running for 21 years, grossing over $8 billion worldwide along the way.

Adapting -Frozen- for Broadway, therefore, probably seemed like a sure thing. After all, it's the highest-grossing animated film of all time.
Hits: 2979 · Reviews: 0
finance.yahoo.com
facebook twitter reddit linkedin tumblr
Print this page Send this story

Not yet reviewed by any member. You can be the first one to write a review.

Why You Should Reach Out to an Old Friend, According to Science

Research suggests the people you've fallen out of touch with will appreciate being contacted more than you think.
Thu, Jul 21, 22, 3 Months Ago in Science

Doctors now warning that the coming COVID-1984 vaccine will 'put you down'....

This is what we've been warning you about, and it is almost here, are you ready for what's coming? The COVID-1984 coronavirus vaccines, slated for possible mass release next month, come with a whole host of nasty and...
Sun, Nov 29, 20, 2 Years Ago in Science

Thousands of Americans have received unsolicited packets of seeds this year, mostly from China.
Sun, Sep 6, 20, 2 Years Ago in News

Solar power costs up to 3x as much as fossil fuels, nuclear and wind power - NaturalNews.com

(Natural News) Solar power might sound like a great alternative to other types of energy on the surface, but when it comes to cost savings, the numbers might surprise you. Last year, the average wholesale price in...
Sat, Oct 24, 20, 2 Years Ago in Science

New robots can see into their future | Berkeley News

UC Berkeley researchers have developed a robotic learning technology that enables robots to imagine the future of their actions so they can figure out how to manipulate objects they have never encountered before. In...
Sun, Dec 31, 17, 5 Years Ago in Science

A grin stretched across Robert Ward's face Thursday afternoon as he talked about the three meteorites he found in less than four hours. -It's a really spectacular specimen,- the researcher said, showing off the...
Fri, Jan 19, 18, 5 Years Ago in Science

See if your site has any manual actions issued against it and view the site's manual action history. If a site has a manual action, some or all of that site will not be shown in Google search results..
Mon, Mar 29, 21, 2 Years Ago in Technology